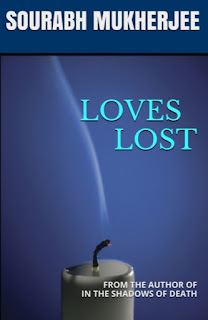 It's spring and love is in the air. In keeping with the spirit of the season, I wanted to share with you an excerpt of the story "Love Came Calling Again" from my book "Loves Lost".


I have always wanted to "feel" the love for someone, more than "being loved" and pampered.

I missed having someone in my life I would feel like cuddling with, on the couch in front of the TV with a tub of popcorn on a rainy evening, or someone I would just be happy buying things for, even if he didn’t need any of those. I missed being unreasonably possessive about someone. I wanted every romantic song I heard to throw up images of me in the arms of that special someone. I’ve always wanted someone to think of when it rained and the earth smelt sweet; I’ve always waited for a name I could whisper with my heart and soul, while clinging to my pillows under a warm blanket on a cold winter night. I spent my days and nights with that dream. And when I would meet him, there would be chimes in the air and a light drizzle, and an unruly breeze would play with my dupatta before his passionate gaze.

And then I met Karan. His father was a manager in one of the companies Dad owned in Kolkata and we met in one of Dad’s office parties I had reluctantly accompanied him to. I learnt later that Karan had been a reluctant guest as well.

The colour of my nails was fading; he had not bothered to shave and had a three-day old stubble. But, love caught us unawares as our eyes talked and our hearts made silent promises—with the live band playing out requests from drunken guests.

Karan worked in Mumbai and I was about to finish my studies in Kolkata. We soon realized that staying apart was not an option anymore. I found a job in Mumbai after university and moved in with him, setting up our home with love in our hearts and dreams in our eyes—leaving our conservative families shocked.

Within a year, the unexpected happened...

Ernest Hemingway said, “There is nothing to writing. All you do is sit down at a typewriter and bleed.” Reading the poetry of Subhadip Mukherjee in his book ‘ ছেঁড়া চিন্তার Scribbles’ (Offtrack Publishers, co-authored by Dr. Kausik Ghosh), I am convinced that he is bleeding. And that’s good news. Subhadip is a nagorik kobiyal. His poems hold mirror to the stifling urban life with its rat race, with its mindless pursuit of  materialistic ambitions, and with its consumerism. নাগরিক ব্যস্ততা নানা জটিলতা... দাশু বারবার কিস্তিমাত He mocks the same judgemental urban society right in his introduction when he says: যদি তাকে চিনে থাকো যদি তাকে জেনে থাকো Boss, বেশী . মিশোনা তার সাথে সামান্য নেশা হবে ... তুমিও " খারাপ " হবে দেরি হবে রোজ রাত্তিরে Subhadip’s poems paint love in its myriad hues – from extreme euphoria to brooding despondency. Subhadip depicts the unadulterated purity of love when he says: তুই ক্লাস নাইনৈর খাতার
Post a Comment
Read more

Book Review - Ajaya: Roll of the Dice by Anand Neelakantan

Ajaya: Epic of the Kaurava Clan by Anand Neelakantan published by Platinum Press (Leadstart Publishing) brings a unique perspective to the story of Mahabharata. In his introductory note, Neelakantan sets the premise of his work and is compellingly convincing in his characterization of Suyodhana, more (in)famously referred to as Duryodhana in popular lore, when he draws the reader’s attention to his unwavering determination to fight for his belief, his bravery and his strong personality. Neelakantan calls out incidents such as Suyodhana’s willingness to challenge the prevailing caste system by making Karna the king of Anga; his feelings for Ekalavya; his gallantry in taking on the Pandavas. At the same time, Neelakantan depicts him as a fallible human being, in sharp contrast with his cousins. Neelakantan’s storytelling is lucid and he creates powerful imagery. Right from the ‘visually rich’ and dramatic entry of Bhishma into the palace of Gandhara to walk away with the princess Gandha
Post a Comment
Read more