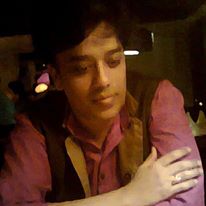 I strongly believe that an author of popular fiction, trying primarily to entertain, also has a great social responsibility. The work of an author, in my view, should be socially relevant and should hold mirror to the changing times and lifestyle of the people his work is meant for.

In the garb of a thriller, In the Shadows of Death deals with a number of issues - fragility of marriages, corporate scandals, insecurities in a relationship driving an individual to the edge - each potentially leading to passionate debates, diverse perspectives and interpretations. I have been acutely conscious of the same all along. As an author, I consider it my responsibility to present my point of view, and share my thoughts with readers and reviewers.

Firstly, I would like to draw attention to the portrayal of the modern day urban man and woman in the story.

While there are female characters in the story who make certain personal choices and the resulting indiscretions lead to their eventual doom, the story is never judgemental, and for every character, there is a sub plot delving into the circumstances that cause that character to behave in a certain way. This, in fact, has been hailed as one of the strengths of the book.

As Ms. Abhinaya Harigovind says in The Hindu (http://www.thehindu.com/todays-paper/tp-features/tp-metroplus/murder-mystery-and-urban-life/article8078673.ece) “his characters are not all black and white, and he is not quick to judge actions such as adultery as being sinful. Rather, he examines the several alternate reasons for their actions.”

In fact, instances of a woman being indiscreet are balanced in the novel by situations where the failure of a relationship is attributed to the man denying his woman the bliss of motherhood or, routinely ignoring her emotional and physical needs or, choosing to pursue his professional and materialistic ambitions at the cost of the relationship or, being unduly suspicious and insecure.

If there are male characters in the story who, standing on the relics of failed relationships, eventually realize their mistakes and own responsibility, that, in no way, makes the story biased towards men.

Women have always formed the backbone of my storytelling and In the Shadows of Death is no exception.

Secondly, the novel does not “stereotype characters”.

When I look at Kolkata today, I see a city in the cusp of change. A sizeable percentage of contemporary Kolkatans is from a generation that is ambitious and ready to embrace 'the good life'. It is a generation which has seen its parents struggle, yet has barely gone through that struggle itself. And for many, there is a singular focus on fulfilling their own desires and ambitions at any cost. In the process, Kolkata today is experiencing a significant change in its societal structure and core ethics of its people. This has been a key motivation behind my story.

In fact, In the Shadows of Death has been hailed as a book that broke stereotypes in 2015. (https://www.tell-a-tale.com/6-indian-books-that-broke-stereotypes-in-2015/) The reviewer aptly points out “In spite of being essentially a crime thriller, In the Shadows of Death makes it to this list for its stark portrayal of a generation which has suddenly gained the right to be ambitious... there is a subtle undercurrent of the changing societal structure and core ethics.”

As Ms. Abhinaya Harigovind says about the characters in her critique in The Hindu (http://www.thehindu.com/todays-paper/tp-features/tp-metroplus/murder-mystery-and-urban-life/article8078673.ece) “The book delves into the deep, dark recesses of the mind as it explores the vice-like grip that human emotions hold over our actions. (There are) detailed observations of human behaviour and the complexity of human relationships.”

And as Mr. Vishal Birje mentions in his review of the book (http://thetalespensieve.com/2016/03/book-review-in-the-shadows-of-death/) “The key elements of the book are the characterization and the details with which the murders are described. The author uses only a few potent strokes of words to describe the characters but they hit home instantly and, rather touchingly.”

As one of the readers beautifully sums up, “What sets this apart from other great thrillers is the way Sourabh has woven human tales into the fabric - you can find the characters next door, the detective is not larger-than-life like authors are always tempted to make their heroes, and at the end, even the killer turns out to be a human instead of the twisted monster that I was expecting.”

Finally, I would like to touch upon the characterization of the antagonist of the story.

I would like to quote from Ms. Kishori Sud’s thought-provoking review in The Times of India (http://timesofindia.indiatimes.com/life-style/books/features/Book-review-In-The-Shadows-of-Death/articleshow/51455322.cms) “At the end, even the killer turns out to be humane instead of the twisted monster that one was expecting.”

Ms. Abhinaya Harigovind has to say in The Hindu (http://www.thehindu.com/todays-paper/tp-features/tp-metroplus/murder-mystery-and-urban-life/article8078673.ece), the characterization of the antagonist reveals the author’s “almost Freudian understanding of how our childhood experiences influence our adult decisions.”

Finally, Mr. Vishal Birje mentions in his review of the book (http://thetalespensieve.com/2016/03/book-review-in-the-shadows-of-death/) “The great triumph of all the good detective novels, however, lies in the characterization of the antagonist—and the author has done right justice as far as that aspect of the book is concerned... while his identity is kept secret right down to the wire, his motives are revealed or rather explored right at the beginning, which makes the character hauntingly brilliant.”

I do not hesitate to claim that I take pride in the Epilogue of the story, which a number of readers and bloggers have called out as the most moving part of the entire novel. Mr. Vishal Birje mentions in his review of the book (http://thetalespensieve.com/2016/03/book-review-in-the-shadows-of-death/) "In fact, the last page of the story will force you to ponder over the seriousness of the issue here."