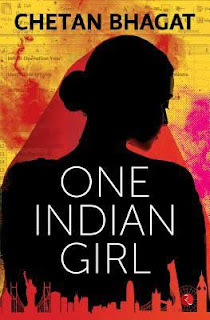 With 'One Indian Girl', CB breaks new ground. He writes in the voice of a woman, he talks about the challenges the Indian society, the Great Indian Family, the workplace keep throwing at modern urban Indian women, and how the protagonist battles against all of this and also, "her own inner voice at times". The last is a very clever and in this context, very successful writing ploy. CB maintains an almost parallel thread where the inner voice of the girl, brought up in a conservative, archaic environment seeped in ridiculous traditions, is often in conflict with the decisions her learned, logical and rational mind takes.
In some sections of the book, I see CB taking a VERY mature and evolved tone of writing - in sharp contrast to some of his earlier books. The couple of sequences (one in her US apartment and another in her Hong Kong apartment) where the girl stands for her dignity and her values, even at the prospect of her dreams and her love being shattered, were VERY convincing. I loved the dialogues, and the nuances and body languages that CB portrays in those scenes.
However, the story does have its stereotypes. The Bengali boy is predictably in a 'creative' profession, miserly, communist in his outlook, not ambitious and unsure about where he wants to go in life. The corporate honcho at 45 is salt-and-paper but super-fit and sexy, has a wife and children tucked away while he sleeps with the girl at work. The geek working in FB of course has a side-parting, agrees to an arranged marriage and looks up to his would-be bride to get his nerdy existence moving and shaking. And of course, the DDLJ-ish ploy that each of these men adopts to wrench her away from the 'mandap'.
Also, the book takes on a very frothy, almost comical, tone when these men land up at the wedding and that did not go well for me, especially after the very evolved and intense writing about these individual relationships.
But, the stereotypes notwithstanding, this definitely, is a break-out novel from CB and a step in the right direction towards the next level of CB-Lit.