Kolkata: The anatomy of a city in Agni Mitra thrillers 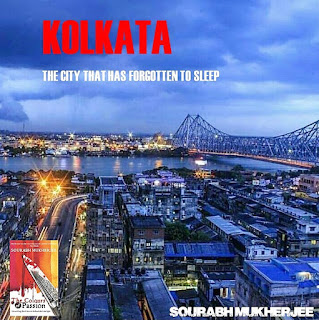 The first Agni Mitra thriller ‘In the Shadows of Death’ (https://goo.gl/ajgKLn) starts with a portrayal of Park Street on a rainy evening, which goes as below:

“Those who had run for cover under the shades included men and women who had been working late in the many offices in the neighbourhood, street children who would otherwise flock around foreigners staying in one of the plush hotels in the area, pimps who carried albums loaded with pictures of call-girls and would get in the way of men roaming around alone in Park Street, and hookers who roamed the streets or waited patiently for hours on end in desolate corners of the roads or in the bus stops in their loud make-up and hopeful eyes, waiting to be picked up and driven to cheap hotels around the place. The incongruous mix of people who stood next to each other, skin to skin, in the bus stops or under the ledges of the showrooms of global brands that lined the road, made Agni smile to himself every time he crossed them. That one stretch of road had something for everyone in the city – the movers and the shakers, and those resigned to the gutters.”

This picture of the throbbing heart of the city contrasts sharply with the serenity of the Ganga at the Princep Ghat in another section of the novel:

“The Ganga stretched below us on both sides, the gloom of the sky reflected in its black waters. The riverfront stretched behind around Princep Ghat. The trident lights, landscaped gardens, fountains, street food and a quiet boat ride away from the din of the city – the perfect getaway.

Every city has one, I guess. After all, you do need a place to hide when everything and everyone around you seems alien.

I hit the Kona Expressway which connects the city with National Highways 2 and 6 leading to Delhi and Mumbai. The concrete around me gave way to the green, and the bumps and potholes underneath vanished. I stopped at the Toll Plaza briefly and then drove straight. The empty road stretching to the horizon like smooth black silk beckoned me…”

When the reviews started coming in, I realized that in addition to the plot and the characterizations, my portrayal of Kolkata has touched a chord with readers. Some of them even wanted me to explore the city more in my next story!

While writing ‘The Colours of Passion’ (https://goo.gl/cnY38Z), I did exactly that!

Thus, the backdrop of the story ends up being an eclectic collage.

While writing this novel, what I realized is that, in the ‘new’ Kolkata, we have the moneyed upper class and the upwardly mobile middle class with its new-found avenues of prosperity that make the city a natural destination for global brands and plush real estate. We have shopping malls which are among the best in Asia, residential apartments which literally kiss the sky (the 'Atmosphere' towers on the E. M. Bypass with its skywalk 'Deya' finds a mention in the novel), nightlife which is among the best in the country, and a glamour industry which is getting its due attention in the national and international arena.

We also have the squalor of slums like Tiljala that are now home to the burgeoning mafia – smugglers, contract killers – and their unholy nexus with politicians and industrialists.

Yet, the ‘bright morning sun reflects from the steeple of St. Paul’s Cathedral’, ‘holidaying crowds make a beeline for the decked-up horse carriages for a ride by the Maidan and the Fort William grounds’, and the ‘autumn mist still hangs on the vast expanse of the Maidan’ and come autumn, ‘the city erupts with festivities, when happy faces beam all around and laughter echoes in the autumn air, when crowds throng streets awash with lights’.

Kolkata comes alive in the pages of 'The Colours of Passion' as Agni traverses the city in hot pursuit of a murderer responsible for the brutal rape and murder of Tolly heart-throb Hiya Sen, followed by two more murders.

My Kolkata is a living, breathing character in ‘The Colours of Passion’. She had to be introduced in all her glory – warts and all notwithstanding – to the world, all over again.

(Note: Quoted lines are from the works of the author)